Angel, Dance for me

How many angels can you fit on the head of a pin? Don't laugh, this was a hot topic for debate amongst Clerics, c1332. This is a surprisingly subtle question and raises further questions about the fundamental nature of our existence. Anyway, if angels are not made of matter and are pure 'spiritual energy', whatever that means, then they are without dimension and form and occupy no space. Having said that however, ultimately all matter can be reduced to waves and therefore solid matter is but an illusion, although a very persistent one. What is perceived as matter is really ‘a whizz’ of wave radiation bound by forces which are poorly understood.
But contemplation of angels as 'energy' is not as simple as envisioning angels as photons. Angels are sentient and therefore their 'energy' is not an energy we are familiar with. Angels are supernatural entities and therefore reside outside the natural world and by extension are not subject to causality. Even if we could persuade a host of angels to gravitate toward the vicinity of a pin head they would defy measurement. This is but one aspect of the discourse.
This raises the question of how sentient supernatural beings can interact with us at all. In the distant past angels apparently communed with man; tis in the bible- look it up........
According to the Bible, angels can connect with the natural world and therefore, during this interactive interlude, they must be subject to natural law and hence causation. So, let us take a different tack for sophistry's sake.
"The medieval doctors of divinity who did not pretend to settle how many angels could dance on the point of a needle cut a very poor figure as far as romantic credulity is concerned beside the modern physicists who have settled to the billionth of a millimetre every movement and position in the dance of the electrons."
According to Thomas Aquinas, the ultimate Catholic scholar and medieval ‘Angelic Doctor’, no two angels can occupy the same space. This is in accord with quantum physics and abides with the Pauli Exclusion Principle. The next point concerns the size of the pin head under question: to wit, the size of a standard pin head. In order to move this argument along it is necessary to make an assumption. For our purposes, said size will be a sphere of 1 Angstrom diameter with an associated mass of 9.5 x 10-29 kg. Also we need to note that space is not infinitely divisible. This limit is denoted as the Planck length, or 1.6 x 10-35 m. Next we need to decide the information carried by a standard angel. Note: I have made no allusion to mass. In fact in this simple case, I'm assuming mass-less angels. The introduction of mass into the equation will result in 'reductio ad absurdum- which would make the whole argument just silly. So for our purposes I will assume that angels comprise of 'one bit' of information. They cannot be less than this information limit and logically remain within our reality. There is one last concept to be introduced before we begin our calculation. The Bekenstein bound (k) or universal entropy bound is a limit on the entropy that can be contained in a physical system or object with given size and total energy. It follows: In a system of diameter D and mass M, less than kDM distinguishable bits can exist, where k=2.57686x1043 bits/metre kg. From this we can derive an upper limit of 2.448x105 angels on our pin head.
There are some clever bastards who demand that the angels should be a dancing. This introduces a whole new set of thermodynamic and velocity parameters into our hypothetical situation which will undoubtedly alter the upper limit of angels gyrating on the pin head- basically these bastards can fuck off. 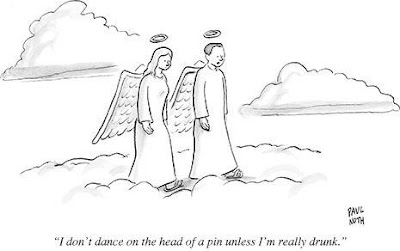