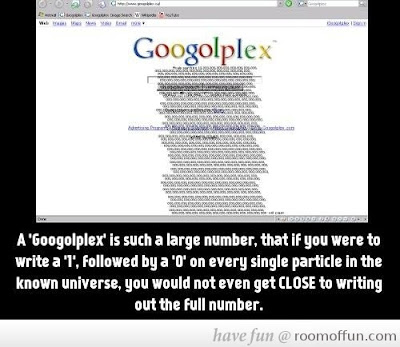 What do we know about very large numbers? Even the dullard knows that numbers continue forever..... Think of a very large number and add 1; repeat as necessary. But what about very large, useful numbers. How big can it get? Well, the googol is very large and is represented as 1, followed by a 100 zeros. This is more than enough to deal with all the particles in the known universe, which comes in at an understated 1 with 80 zeros. There is also the googolplex or 1 followed by a googol of zeros. Tis enough to goggle ya mind, eh? This number is so large that if you converted the universe into paper it would not be enough to write all the zeros on. But sadly we inhabit the real world and are forced to contemplate numbers which have meaning.

I'm bothered by very large numbers. To be honest, I'm bothered and perplexed by many things but numbers have a special place in my botherment and plexibility (yes, I know I've just made these words up. But one day they will appear in a lexicon, near you- mark my words). When I close my eyes, all I see is a sea of numbers cascading over themselves in vivid colours.

Graham's number
Ronald Graham is an American mathematician. He was working on a particularly obtuse mathematical problem which required the application of very big numbers. The problem is illustrated below:
Connect each pair of geometric vertices of an n-dimensional hypercube to obtain a complete graph on 2n vertices. Colour each of the edges of this graph either red or blue. What is the smallest value of n for which every such colouring contains at least one single-coloured complete sub-graph on four coplanar vertices?

Bloody mathematicians are just weird. Graham came up with a solution back in 1977. Weirdly this number has entered the Guinness Book of Records as the largest number used in a serious mathematical proof. Unlike the very large numbers most of us can come up with, given a boring wet Sunday afternoon, Graham's number is not arbitrary and has a use in the wonderful world of mathematics. This number is so mind-bogglingly large that conventional mathematical notation won't do. A special notation is required. A notation by the name of: 'The hyperoperation sequence'. I'm not going to delve into the concept too deeply as it will become tedious to readers not schooled in number theory. For our purpose, it is necessary to note that it involves the application of iteration: where each operation in the sequence is an iteration up from the previous operation. It is enough to say that the notation enables the manipulation of extreme numbers without the need for an infinite number of pencils or writing pads. This notation enables serious mathematicians to go into a frenzy of number operations and keeps them from the dining table and stops them interacting with normal human beings. This has got to be a good thing, because as I mentioned earlier, professional mathematicians, unlike myself (just a none weird amateur), are exceedingly strange folk and should not be approached unless you are armed with a particularly difficult mathematical proof which you can lay at their feet as tribute. Then you are free to rifle their home at will and violate their women folk unrestrained. Oh, I forgot to mention a very salient fact, you will find no women folk in a mathematician's abode- unless its their mother; I'll stop there.

By the way, Graham's number is so fucking huge, that in comparison I can contemplate death with veritable aplomb. 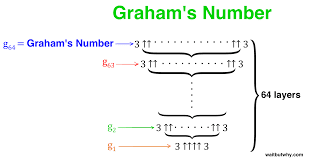