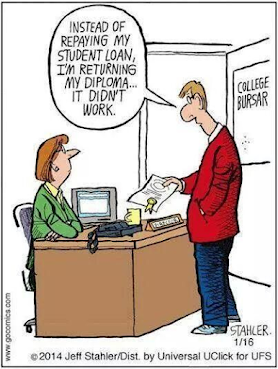 None Transferable
The power of education. I've approached this topic on my blog before, possibly from a few acute and even obtuse angles. However, tis possible that in this post I have something new to add.
Higher education (post-High School) has been elevated as the ultimate attainment and the necessary requirement for the fulfilment of financial success and stability; an automatic pass unto the 'Middle-Class'. Here everything is rosy and white picket line fences adorn orderly immaculately kept lawns abounding serried ranks of detached homes. Tis/was the American dream after all.

As a lad, I came to the world of acaedemia rather late. However, once ensconced upon the path of 'enlightenment', I pursued the intellectual route as if Damascus bound. In those halcyon days of the 1970s, my higher educational aspirations were funded by the taxpayer. Not only was my degree paid for but I received a modest stipend. Once graduated I continued my studies and my post-graduate programmes were funded, for the most part, by scholarships. Race forward unto the modern era. The taxpayer no longer funds higher education and the aspiring student (most of them at least) will have to succumb to the pernicious system of serial loans. Their reasoning: once complete, education will lead to high-paying jobs and the money spent will be seen as an investment in future prosperity.

No doubt, the path of Higher Education, in today's bustling economic market and society contributes to the future success of some. Of course, there are those that cannot fail because of familial connections. There is a reason why barristers and doctors have a tendency to run in families. Hunter Biden, anyone?

It seems that to get any job these days a degree is a prerequisite. For the most part, a degree is not really necessary and the degree itself, in the content taught, is not applicable to the job. This obviously does not apply to vocational positions.  For prospective employers, a degree indicates an air of intellectual respectability and a marker that the candidate has the cognitive wherewithal to be a competent and easy-to-train employee. This argument held sway 40 years ago when perhaps 5% of the population partook in higher education. But in the age of meritoxcracy, 50% of New Zealanders attend University. This statistic is mirrored and reflected throughout the known Western world. What does it mean when higher education becomes commonplace? It has to be a universally good thing, where everyone benefits? Job seekers are more knowledgeable and intellectually prepared for the modern workplace. Employers are gaining employees who are intellectually mature and prepared for entry into the innovative work enviroment. As a counterpoint: if most members of society are obtaining degrees, what does this have to say about the quality of the education being doled out? Back in the day- O those yesteryears when the streets were paved in gold (not dog shit) and a quid could buy a bushel of ferrets (neutered)- those times are no more. Anyway, back to the topic at hand. In the 1960s, for example, higher education was reserved for the intellectual elite and attendance necessitated a degree of mental acumen. It was hard to get in and the degree programme was intellectually demanding. Today, however, all it takes is a participation certificate and a note from mom and the gates of knowledge open, as if by magic, and you enter on a magic carpet made of bank notes.......

Higher education is big business. Governments can no longer fund higher education through taxation and thus it behoves the student to be rich, or more likely, to enter the dark world of debt at the tender age of 18. And then after obtaining the prized degree the newly, intellectually franchised individual, is ready to enter the workforce with a debt of 100k. When making money is the main concern in education you can be assured that the quality of that education is secondary and invariably suffers as a consequence. Let me be frank: a good proportion of students in higher education do not have the innate smarts to complete a legitimate degree course. Sadly, I have seen the effects of the 'money first' principle first-hand. In my previous life, I used to teach and mentor students engaged in a degree course for Lab Scientists. For the most part, the quality of the course and the students encountered was high. This is in keeping with expectations. But even in a topic where intellectual rigour is paramount, I encountered a couple of choice specimens who had wandered far from the ideal. One lad, actually a very nice chap, although not endowed with any intellectual attainment, was particularly exasperating to teach. During the course the students were bidden to undertake a practical research project culminating in a PowerPoint presentation to their peers. I remember the day as if were 15 years ago (it was 15 years ago). The whole presentation was excruciating to watch as it was apparent that the student was struggling with the concepts engendered. I had the task of informing the University Department, by email, that the student would fail this aspect of the course. I received a phone call, within a thrice, informing my good self, that failure was not an option. This particular student was magically transferred to a new mentor for academic consolation.

You can get a degree in anything these days? Want to study: 'The Patriarchal Oppressor in Western Society', then there is a course for you. My point: many modern degrees are worthless in study and application. There is a reason why entry into the STEM subjects and medicine is hard. You have to show, before admission, that you have the intellectual mettle to complete an intellectually challenging and demanding subject.

And the upshot: we churn out a host of graduates with unrealistic expectations. Employers are not to be fooled. A degree in gender studies or philosophy is a great foundation for working at Mcdonald's. The student dream of using their degree as a pass into a high-paying profession, is just that, a dream. As it has always been the case, those with talent will do well (all other things being equal), while those cut from lesser cloth will have to tailor their ambitions accordingly.

Thus far, I have not considered the logical extension of running Universities directly funded by the students. Over the last few decades, there has been an explosion of 'for-profit' institutions. There is no pretence, here. The bottom line is money and the cost of attending is way higher than attending a traditional edifice of education. The only qualification for enrollment is the fee. As for the quality of education, I will say no more here. I have already covered this elsewhere in this esteemed blog. And if you are a really lazy student, there are 'colleges' that will send you a degree certificate without the fuss and dedication of years of study. Just send a cheque and matriculation and graduation are covered by your work experience.

I'm going to be accused of being cynical, world-weary and no doubt, an elitist bastard. Guilty on all counts, M'Lord. I'll leave the post with this last thought (actually it is penultimate): the world is a tough and scary place. Unless you are so fortunate to have been born white, in the West, and rich, you will only rise and succeed by your own ability, grit and mettle. As a viable alternative, for the favoured few,  if you are female, beautiful and blond you could marry into wealth. But for most, there is no real alternative to being smart and hard-working. There is one constant though. The world is still run by the 'True Elites' of this world. And unless the fundamental laws of human nature are about to change, this will always be the case.

I now come to my last point. How come after my many years of higher study, I still can't bloody spell. Arse.