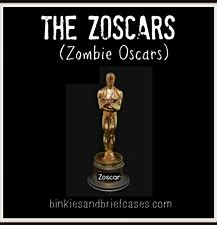 Let's be honest, the Oscars this year were a travesty and completely pointless. And yes, I'm well aware that I'm a little late in my critical appraisal, as the Oscars were screened in April- did anyone notice?

Not only the Oscars, but other 'Entertainment Extravaganzas', such as the Golden Globes, are starting to merge into a political rally for the far left. Privileged, often white actors, seize their opportunity onstage to rail against the establishment and white male societal dominance. What formally used to be light entertainment has now become a rallying event for the 'Woke Brigade'. The only glimmer of hope was last year's Golden Globe awards hosted by the irrepressible Ricky Gervaise. He pulled no punches and gave the self absorbed, self important celebs, a right royal roasting. His caustic invective caused verbal ripples and consternation among the stars. They were none too pleased to have their egos viciously pricked; he was relentless and totally merciless. And the viewing public loved it. Sadly, as Mr Gervoise predicted, it is unlikely that he will be allowed to run rampant at an awards ceremony, ever again, which is a bloody shame.

Gone are the days when award ceremonies were perceived as entertainment watched by the masses. Over recent years the 'events' have become an arena for highly paid, so called stars, to berate the audience for a host of perceived ills in society. Folks at home are not impressed and expressed their disenchantment by tuning out. They argue: what right have a bunch of 'lovies' to lecture the public? Why should we listen to a gaggle/rabble of millionaires who have found fame and fortune on the basis of good looks and luck. How are they qualified to berate the populous concerning complex issues of which they have absolutely no understanding? As Mr Gervoise so wisely expostulated: “why don't you shut the fuck up and get pissed”. Wise words indeed.

Disaffection with this year's Oscars was palpable. In 2015, the Oscars pulled in over 37 million viewing punters. This in itself was a major decline from the 1990s, when the Oscars were watched by 58 million. This year not so much. Only 9.5 million folk could be bothered to tune in. Some of the smarter celebs are seeing the 'way of the wind' and express disdain with the proceedings by not showing up to the debacle. Sir Anthony Hopkins, although receiving the Oscar for, 'Actor in a Leading Role' category, for his performance in 'The Father' couldn't be arsed to show up. Apparently, Sir Anthony's agent stated that his esteemed client was fast asleep at home.

The ceremonies have trailed away from their prime directive and are no more than a sounding board and a finger wagging exercise for a bunch of twats totally out of tune with the viewing public that they are supposed to serve. Award events have become increasingly irrelevant over recent years and deserve to wither away as befits their futile status. Will anyone notice? Gone are the days when celebs could command public awe and unjustified adoration. Our critical age has revealed their true worth. No one gives a shit. So called celebs and screen stars need to adapt to their new found, lowly status and take on board a good dose of well deserved humility, if they can. Arse.