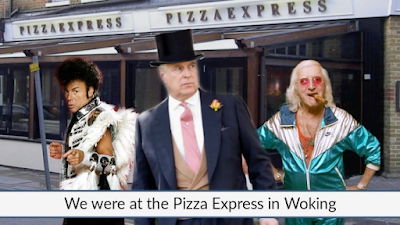 More shock news for Prinz Andy, Randy, Pandy, Dandy, from the cosy principality of Tipton as a lawsuit brought by Miss Nubile Magumbo will be heard in a court of law, after all. It was hoped that the prince could weasel out of the case by pleading that he was very important and rich and the gel in question is just another grimy prole. This tactic has worked on previous occasions. This time, however, the court case will take place outside the metropolitan borough of Tipton where his baleful influence counts for fuck all. The prince alleged that the young lady in question, “is a flappy old trout and a lousy lay to boot”. The prince denies ever meeting Miss Tartybum. To recap: Miss Leggs Akinbo has accused the prince of repeatedly taking her womanhood on numerous occasions when she was a young maiden, unsullied.

The Prince was a confidant of a convicted rapist, Gottfried Epinephrine. Mr. Epicrichbastard tragically committed suicide before he could incriminate his esteemed clientele. As you will recall Mr. Epicanthic-Fold was found dead in his palatial cell after he killed himself by repeatedly berating himself about da bonce with a blunt Toblerone.

Prince Perjury has strenuously denied meeting Miss Gullible even after being shown a photo with his hand jammed into her moist pudenda. Prince Panderer has cast doubt as to the ownership of the errant hand. In an interview, he had this to say: “That can't be my hand as my hand at the time was resting in a wench of ill repute at the local brothel, er, I mean I was eating caviar on a bun at Tipton pizza el vomito ”.

Miss Mugumbo has claimed that the Prince, 'sweated like a cunt'. The Prince countered that he does not sweat as his pores are permanently occluded with bullshit.

And so the trial will commence. The formal charges are as follows: It is deemed that Prince Randy, Andy, Pandy, did on three occasions violate, despoil, ravage, defile, depredate and devirginate Miss Givemecash whilst she was below the age of lawful consent. The integrity of her maidenhead had been breached and sullied. Therefore, in order to assuage the outrage perpetrated on a young maiden, it is necessary that Prince Nonce pays the grand sum of 30,000,000 groats as compensation.

It is understood that the Prince's highly expensive/extensive legal costs are being covered by the taxpayers provided by his mother, the dowager, Queen Sharon of Tipton. She will also cover the punitive costs incurred, again provided by the willing and grateful citizens of Tipton. Thus the whole escapade will cost the Prince, absolutely fuck all.

God bless you maaaaam. The queen is 104.