The PIAT in all its feral glory

During the early years of the Second World War, the most effective means to deal with an enemy tank was to shoot a heavy solid projectile at the little bugger, at high speed. There were a variety of known factors that influenced a projectile's lethality, which was basically the ability of the solid shot to travel through the total thickness of the armour. The physics involved is extremely simple. The amount of energy imparted to armour is directly correlated to the weight of the solid shot multiplied by the shot's velocity. Of course the final velocity of the projectile would be dependent upon the distance the shot had to travel before impact.

When it came to an infantry portable 'one man' anti-tank weapon the only effective option at the beginning of the war, for the British Army, was the Boys anti-tank rifle. In essence, the weapon was an upscaled infantry rifle with a large calibre bullet. Although initially effective against German tanks it became less serviceable as the war progressed due to the inevitable increase in thickness of German armour. There is a limit to the size of projectile that can be used, in practice, for a portable one man anti-tank device and by 1941 anti-tank rifles were of no use against the majority of German tanks in service, although they remained useful against soft skinned vehicles.

Enter the PIAT (Projector Infantry Anti Tank), stage left: With the inadequacy of hand held anti-tank rifles duly noted, it became an urgent priority to develop a replacement. Clearly, a new approach was required. The PIAT entered into active service in mid 1943 and made its debut during the Tunisian campaign, to great effect. In essence, the PIAT was a melding of two separate munitions, the spigot mortar and the shaped charge. The shaped charge relied on a principle first observed in the late 19th century. I wont go into detail concerning the development of the shaped charge. It is sufficient to note that the projectile was reliant on chemical, not kinetic energy. The 'bomb' contains a metal lined conical hollow backed with explosive (see diagram for more detail). Detonation causes the metal lining to collapse to form a jet of molten metal. The jet travels at hypersonic speed and when encountering armour cuts through the metal scattering debris and molten armour into the interior of the tank causing catastrophic devastation to man, ferret and material alike. Unlike kinetic energy rounds, shaped charges do not rely on their velocity to cause havoc as all the means of destruction is contained within. 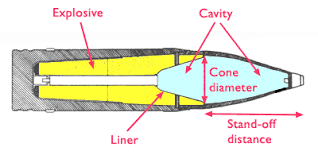 In order for the shaped charge to become a practical weapon it required an instrument of projection. And so the bomb was married to a modified spigot mortar. Again, there is an interesting, nay intriguing story, concerning the development of the 'mortar'. If you are prone to insomnia, I recommend two tinctures of laudanum combined with a midnight read of the salient material. A sterling soporific, indeed.

Thus, the PIAT was an ungainly fusion of the shaped charge and spigot mortar. The composite device worked in the manner of a recoilless rifle. The mechanism of action was extremely simple. A central spigot operated on a spring which was compressed (cocked) by placing the PIAT on the floor. The soldier would grasp the two outer handles and apply force to cock the weapon. The bomb was placed in a open chute on the front of the weapon. When the trigger was pulled the spigot was released and the firing pin on the end of the spigot would engage a small propelling charge at the base of the bomb. The combination of the applied force of the spigot plus the detonation of the charge would propel the bomb toward the target. The recoil of the weapon was sufficient to drive the spigot back and therefore after the first shot the PIAT was automatically cocked, in theory at least. Once the bomb reached the target, the fuse would activate the shaped charge and release the jet of doom which would sear its way through the armour to the detriment of the crew and the tank.

Although the PIAT was simple in conception and operation, and appeared ad hoc and crude it had several advantages over the contemporary American bazooka. The bomb carried a hefty punch (1.1kg/2.2lbs) of explosive and was capable of penetrating four inches of armour. This was enough to turn any German tank into a pile of rubble and leave the crew mangled beyond repair. The PIAT  was considerably more powerful than the bazooka and unlike the bazooka there was no back blast. Therefore, the PIAT could be fired in enclosed spaces without cooking the operator and anyone standing the vicinity. Also, the back blast of the bazooka gave away the weapon's position encouaraging quick retaliation. Because of the size of the charge the PIAT was also useful in clearing rooms and breaching blockhouses. The PIAT was credited with prodigious range and supposedly was effective as an anti-tank weapon at 150 yards and as an indirect fire weapon, 300 yards. In practice, and according to wartime trials, a skilled operator could hit a tank 60% of the time at 100 yards. In addition, the PIAT was easy to manufacture and relatively simple to use, however, the initial manual cocking was a cumbersome and a risky exercise during combat.

The PIAT was not without faults. It was a heavy weapon, at 39 pounds, and unwieldly rendering it  unpopular with those tasked to carry the weapon. Although simple to use it had a heavy kick back and the unwary soldier could be left with a badly bruised shoulder, or even worse. When first introduced the weapon suffered from ammunition reliability problems although this issue was solved as the war progressed. In addition, due to the bomb's heavy charge, there was a risk of serious injury to the operator due to metal fragments from the exploding bomb; fire from cover was recommended (no shit, Flaxen). As the war travelled to an inevitable climax (how was the war for you?) the German's, very unsporting of them, began to fit armoured side 'skirts' to their tanks. As a rule of thumb, the molten jet produced could penetrate armour three times the diameter of the cone. As the skirts on the tank detonated the bomb a distance away from the main armour, the piercing potential of the molten jet was drastically reduced rendering the weapon ineffective. However, the skirts only protected the tank's flanks, leaving the front and rear as vulnerable as before.

In conclusion: It could be remarked that the PIAT was a typical British wartime expedient. There is something rather amateurish and eccentric about this weapon. This was not the only weapon to be considered as such, though perhaps the PIAT was arguably the most successful. Its success belied its crude appearance and it remained in active service well into the 1950s. How it would have faired against Soviet tanks, if the behemoth state had decided to roll West in the 1950s is difficult to say. By this time however, NATO had better hand held anti-tank weapons in its arsenal such as the M20 super bazooka.