Philosophy in a Nut Shell/Bag 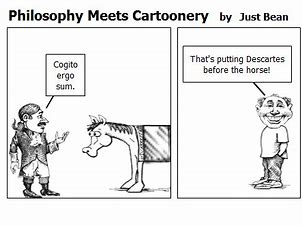 Whilst imbibing Ale, according to strict recommended guidelines, (not a drop less, not a drop more) in my local Tavern, 'The Frolicking Mustelid', Tipton (where else?), I was accosted by the local inebriate and impresario, Pissed Pete, he of rubicund and florid countenance/demeanour. Pickled Pete spake thusly: “Flaxen, you are renowned hereabouts, in these environs and locally, as a savant without peer. Mayhap you are able to address a question of major import, a query that has engaged the best minds for over 2 millennium. Flaxen, are you up to the task"?  I replaced the foaming mug of Ale, 'Ole Scrote Blaster', upon the care worn table of a million drunken spills and squinted wistfully, as if in a reverie or lost in a dream of enchantment and regarded my interrogator, with a wistful eye (just the left one). Pete belched, and the wind of a thousand furies assailed my olfactory system with disdain. The 'Plastered One', regarded me with sanguineous, rheumy eyes and continued. “Flaxen, what is the best definition of 'Philosophy', and if you will, how does it differ from Science' and Theology”? I pursed my lips as if in deep contemplation and responded as follows:

'Philosophy', in ancient Greek can be interpreted as 'Love of Knowledge'. Mayhap this is not a definition that would satisfy the modern mind, as it lacks intellectual rigour, but it sufficed for those pesky Hellenes of yore. The ancients did not distinguish between 'philosophy' and 'science' as we do today. All knowledge, regardless of how it was obtained, was considered under the hefty mantel of philosophy. The Ancient Greeks were not great fans, with some exceptions, of the scientific method as we understand it today. Deep thought, on its own, was the premier method for unlocking nature's secrets. They paid scant attention to what we call Empirical Data and its acquisition.

This post, is exclusively and unashamedly devoted to Western Philosophy. Eastern Philosophy, throughout the ages, although of academic interest, has/had a tendency toward the esoteric and mystical, often adding a hefty dose of mythical elements masquerading as true, enlightened wisdom. This not to say that the Western variety is exclusively rational. For instance, check out the writings of Plato and Kant to name but two. Rational Western philosophers, are not always rational and irrational philosophers are not always irrational; tis extremely difficult to be consistent, all the time. And indeed, Western savants have oft been happy to sprinkle, or sometimes drench their work with theology. Alfred North Whitehead and Schopenhauer acknowledged their debt to Hinduism. While, Aquinas' philosophical system is only comprehensible within a Christian context. Even the great founder of modern Western philosophical thought, Descartes, added theology to his works. That said, too much of a generalisation tends to over simplification and the risk of lapsing into unintelligibility and lack of clarity. Arse.

Philosophic discourse, is eminently suited to such conundrums as: what is courage (Laches?); how can we live a moral existence?; what is the mind, can it be separated from matter?; does life have a purpose or are we adrift in an insouciant Universe? This is just a meagre selection of topics amenable to the Philosophic method, whatever that might be..... The answer to these questions cannot be resolved in the lab. Even the most powerful electron microscope will shed no light, or electrons, on the topics under scrutiny. Most of these enquiries are open ended, and therefore there is no precise, definite answer. In contrast, logical analysis and the quest for knowledge (Epistemology) can provide definitive solutions that defy dispute and remain forever true. And it here that we discern an overlap with the domain we identify as Science.

Imagine a Venn diagram consisting of the spheres of Philosophy and Science. This would reveal a degree of correspondence between these two domains. The overlap would not be great, but the relationship is clearly significant. There are those who would argue that there should be an additional sphere; the sphere of Theology. I find it difficult to imagine any degree of interaction with our neatly arrayed spheres of  Philosophy and Science. Theology, consists of  a series of dogmatic beliefs and doctrine. The answers to life's mysteries are already known with a certainty that revolts the modern mind and remains in stark contrast to the temper of rational thought. Faith, provides solace to those who believe, but faith does reveal true knowledge. On the basis of faith all is possible. Religious certainty provides comforting fairly tales for those seeking assurance in a chaotic world. Theology, as a topic, remains outside the acquisition of knowledge and is best confined to the realm of psychology and sociology.

A simple definition defies analysis and belittles the enormity of the task. I favour a series of phrases that interact to build a coherent framework. Each phrase should interlock into this framework and each phrase should be internally consistent as well as exhibiting consistency with each other. This is deceptively difficult to achieve in theory and practice as we run the risk of becoming bogged down in a morass of detail. Conversely, the definition may appear too simplistic, rendering it devoid of real meaning and content.

Definition:  Philosophy is universally defined as the study of the wisdom or knowledge about the general problems, facts, and situations connected with human existence, values, reasons, and general reality.

My Personal Definition:  Speculations on humanity, the 'self', existence, matter and the universe. An understanding, recognition of what constitutes knowledge and how true knowledge is to be distinguished from irrational beliefs. And finally, an understanding of the limitations of knowledge acquisition.

NB: With reference to knowledge, I have taken care not to include, definite knowledge, as determined by empiricism, as this strictly remains with the domain of science, not philosophy.

As an exercise, I challenge my readers to propose a definition of philosophy, that makes sense to them. Perhaps, if get enough people to participate it could form the basis of a mass-debate.