Pray Away the Gay 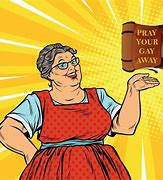 Gay conversion therapy is much beloved by the fundamental Christian brigade, especially in the ‘Bible Belt’ of the US. The idea being that being gay and being Christian are incompatible and that having sexual desire for a member of the same sex is a grave and heinous sin. This is where gay conversion/coercion therapy comes into play. The premise being that an adult’s sexuality is somewhat plastic and therefore malleable and subject to change. Therapy sessions, of dubious provenance, are organised to convert gay Christians to heterosexual Christians, perhaps over a weekend. Often times those subject to gay conversion are under immense social pressure to ‘convert’ and conform to please those close to them, such as friends, family members and individuals of authority in the church.

I used the word ‘dubious’ in the above paragraph for good reason as the scientific consensus on this topic is very clear. Thus, the data is unequivocal in stating that, so called, ‘Conversion Therapy’ is a complete waste of time. It has been convincingly shown that an individual’s sexual preference is an innate characteristic and is likely fixed at birth. Sexuality is analogous to one’s eye or hair colour, in that it is, for the most part, genetically determined and consequently immutable. Let us be clear: therapy of any sort cannot change or influence a person’s sexuality and yet many religious folk, especially those conforming to a simple and strict interpretation of their religious dogma remain adamant that psychological conditioning can overwrite homosexuality and replace it with, heterosexuality. But it gets worse, some religious folk honestly believe that prayer can cure homosexuality as if being gay is an organic disease. And of course, this ridiculous state of affairs is driven, not by empirical science, but by a fanatical devotion to a primitive and obsolete knowledge system. Tis a virtue, after all, to believe in notions counter to reason, especially if it conforms to their particular religious stance, irrespective of that stance’s relation to reason and the real world. Faith is blind for a reason and those that walk in faith’s path are liable to fall/fail.

When the proponents of ‘gay therapy’ cite anecdotal success in conversion they have no real way to objectively measure success in these instances. ‘Success’ relies upon personal testimony which is highly unreliable. It is oft the case that folk delude themselves and their so-called ‘therapists’. This might be okay in the short term, but once the individual finally realises that nothing fundamentally has changed, deleterious psychological harm ensures. Some folk will realise right from the beginning that the conversion has not worked but find it prudent to mislead their therapists and their loved ones in order not to appear as a ‘failure’.

Consider the counter situation: do you think that ‘Conversion Therapy’ could work the other way? That is, convert a heterosexual to the homosexual persuasion? Once the problem is so stated it becomes clear that sexual orientation is firmly fixed. An individual has no volition or control over their sexual preference, it is a quality/quantity of their organic being and a constant. To think otherwise is an exercise in madness.

A recent New Zealand survey revealed that 72% of citizens are in favour of banning homosexual conversion therapy and the incumbent Prime Minister has vowed to make the practice illegal during her time in office. Now usually I’m not a great fan on legislation that restricts people’s personal and behavioural liberty, but on this occasion I am willing to make an exception as I think there is a good case to argue that 'Conversion Therapy' can result in great psychological stress and harm. And again this conclusion is backed up by serious scholarship. I entreat my readers to source and read the extensive literature on this topic. It makes for an interesting and in some instances, harrowing read. While I’m on topic I would like to clear up a common misconception that some folk harbour against the flaxen haired one. I know it might seem ridiculous, but I have been accused of being homophobic. Let me be clear: I am in no way prejudiced toward homosexuals. In fact I would actively encourage sapphism if the protagonists are ‘hot’ and I can watch. In fact, none of my friends are mincing, limp wristed, pooftahs with a predilection of putting their winkies up da arse of other men. However, I am possessed of a wicked sense of humour, mixed with wonderment, and while I have breath in my body I will exercise it with vigour (nay gusto), and according to my wont. Nuff said.

Anyway, good readers, let me know in the comment section what you think of the notion that gays can somehow be changed to become essentially heterosexual. Mayhap we can start a lively and healthy debate on this topic: surprise me!