The Life of Pi

And he made a molten sea, ten cubits from the one brim to the other: it was round all about, and his height was five cubits: and a line of thirty cubits did compass it about. (I Kings 7, 23)

According to the error-free and deity inspired bible, Pi is three. 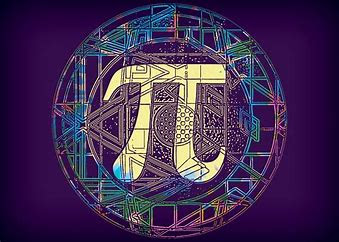 Pi
We are introduced to the concept of ‘Pi’ sometime during our high school education. I don’t have to explain this interesting constant to modestly educated readers, but for completeness: Pi represents the ratio obtained when the circumference of a perfect circle is divided by the circle’s diameter. The resulting constant represents an ‘irrational number’. Thus, the ratio of the circumference divided by the diameter gives a number that cannot be expressed accurately by a fraction. When expressed as a decimal, the number continues, without a repeating sequence, unto infinity. As I recall, as a snotty school kid, I used the simple fraction 22/7 as a reasonable estimate for subsequent calculations. As an aside: Pi is a transcendental number or a real number that cannot be a root of a polynomial equation with integer coefficients- err, yes, methinks mathematicians have way too much time on their hands or is it chalk dust? Moving on…

Mathematicians are obsessed with the notion of mathematical proof and are not satisfied with large sets of data consistent with a conjecture. Thus, tis not enough to show that the non-repeating sequence extends to millions of decimal places and to declare Pi as irrational. There is a need to put forth an elegant mathematical proof which stands as a bastion of knowledge, forever. While scientists would be ecstatic with such a set of concordant data, mathematicians crave absolute perfection. There are a number of mathematical proofs available for Pi however, most rely on a knowledge of calculus and are rather technical and esoteric in nature: on these proofs, I shall say no more.

Pi has a long history. The ancient Babylonians, 4,000 years ago were familiar with this mathematical ratio and declared it to be: 3.125. The Egyptians were interested in Pi for reasons allied to the building of their magnificent edifices and for that purpose they were happy with a less accurate estimate of Pi, at 3.16.

The great Greek scientist, engineer and mathematician, Archimedes (287 BC-212 BC) was obsessed with Pi and was not content with previous estimates. Although he was aware that Pi was an irrational number, and therefore any solution generated would always be an approximation, he nonetheless set out to develop a methodology for a better estimate. Archimedes approach was innovative and ingenious. He inscribed a many-sided polygon within a circle and did the same on the outside of the circle. Thus, he was able to calculate the circumference of both polygons. By utilising polygons with 96 sides he was able to calculate an upper and lower limit of Pi (3.1408 and 3.1429). Therefore he found an approximation of Pi bound between these limits- clever fellow that Archimedes. It is possible that he was working on refining his estimate during the siege of Syracuse by the Romans in 212 BC. When a Roman soldier burst into his room he was so absorbed with his circles that he did not heed the soldier’s command. The soldier was so aggrieved at this imagined sleight that he felt a wave of indignation and relinquished his frustration by stabbing the distracted polymath unto death. Needless to say, Archimedes' mathematical ability was never the same again. 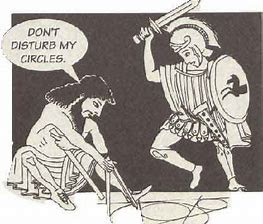 As mentioned in a previous post, mathematics (and science) in the West went into a sad decline after the death of Archimedes and would not be revived until the middle ages. In the 15th century, Nilakantha (remember him?) formulated an equation for the enumeration of Pi, based on an infinite series. Thus he saved his contemporary savants from drawing peskily large circles. It is to be noted, however, that his method only gives an estimation of Pi. The more terms added, the closer the estimation becomes. After five terms, the number is within 0.002 of the correct value of Pi. Since Nilakantha there have been numerous attempts to define equations for the calculation of Pi, with varying degrees of sophistication and accuracy. I’m not inclined to place the various computations here- a simple Gogle search will satisfy my reader’s mathematical expectations and perhaps, curiosity. In our wonderful modern age and with the advent of ultra-fast computers, it has been possible to calculate Pi to several trillion digits.

Why bother you say? In fact, all useful calculations involving Pi only require the constant to reveal forth four decimal points, anything more is simply a mathematical extravagance. I suppose you might ask why mountaineers climb mount Everest or why some folk drink intemperately every Saturday night? However, extravagant Pi calculations are of some practical utility and can be used to test the efficiency of ‘supercomputers’ and have found a role in the generation of random numbers necessary for encryption. Modern-day spies are therefore grateful and indebted to Pi's irrationality.

The 14th of March is ‘Pi Day’: tis a celebration of all things Pi and is usually an excuse for nerds and geeks to consume inordinate (or coordinate) amounts of homophone Pie. And if your craving for all things Pi is not satiated, or slaked, by one day of celebration, don’t despair, because several months later you can revel in ‘Pi Approximation Day’ on the 22nd of July (ie 22/7). 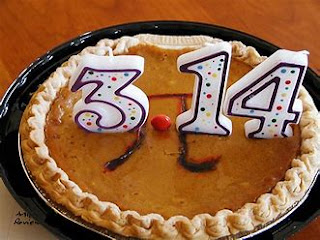 This fraction is only bounded by infinity.