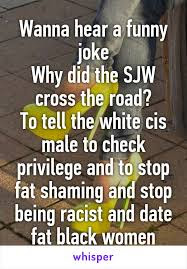 Wonderful snowflakes, assorted SJWs, and folk belonging to the 'woke' community are so selfless and full of the human fraternal spirit that they take on board the onerous task and responsibility of informing us lesser beings on how to think, speak and act on almost everything. If we ever fail to live up to their high standards they are always ready, with strident hysterical tones, to berate us for not doing as they say. Well, thank you for enforcing your proscriptive, silly and frankly bizarre world view on the majority of the population. Makes me wanna burn down a thousand safe places!

Here is a good example of SJW madness: A remake of the 2000 film, 'Charlies Angels' has recently been released to an unimpressed film-going public. It was clear from release day plus one that the film was a flop and unlikely to recoup the $100,000,000 spent on production costs. The film has a very clear agenda: the female Director is a full card paying SJW member and part of the 'woke' fraternity (should that be sorority?) and consequently, the film has a very strong feminist theme and direction. As I recall the previous incarnation was a success because it portrayed the 'Angels' as strong but sexy women. The bikini scenes were universally beloved by men everywhere (probably not pooftahs though). All men wanted to 'date' the lead characters and all the women wanted to be them. Sexy chicks, plus a simple action-packed theme/film equals success. The new version was destined to tank straight from conception. First off, it was bound to alienate 50% of the potential audience; gratuitous sexy scenes did not abide there. Furthermore, the majority of women are not interested in having an SJW/Woke agenda rammed down their throats. Predictably, the Director, Ms Elizabeth Banks blamed men for the film's lacklustre performance and said she was proud of the film. I wonder if the investors are proud of the film? Typical SJW behaviour: blame someone else- she is too blinkered to see that the film is unrelatable to a mainstream audience.

As an aside, Ms Banks doesn't fit the haranguing harridan stereotype- she's really a cute little filly. I bet she would look great in a bikini. Perhaps she should have starred in the film?

The following whimsy was sent to me by Mr Ted Treen. Our Ted has followed my blog for a number of years and always provides pertinent and humorous comment to my erudite and not so erudite musings. He is also a fellow 'Black Country Lad' and therefore we share a bond of fellowship that is not easy to define but exists anyway.

Take it away, Ted:

8:20 - The gay couple living nearby threw a hissy fit and moaned it could have been two snow men instead.

8:22 - The transgender man..women...person asked why I didn't just make one snow person with detachable parts.

8:25 - The vegans at the end of the lane complained about the carrot nose, as veggies are food and not to decorate snow figures with.

8:28 - I was being called a racist because the snow couple is white.

8:31 - The middle eastern gent across the road demanded the snow woman be covered up.

8:40 - The Police arrived saying someone had been offended.

8:42 - The feminist neighbour complained again that the broomstick of the snow woman needed to be removed because it depicted women in a domestic role.

8:43 - The council equality officer arrived and threatened me with eviction.

8:45 - TV news crew from BBC showed up. I was asked if I know the difference between snowmen and snow-women? I replied "Snowballs" and am now called a sexist.

9:00 - I was on the News as a suspected terrorist, racist, homophobe sensibility offender, bent on stirring up trouble during difficult weather.

9:10 - I was asked if I have any accomplices. My children were taken by social services.

9:29 - Far left protesters offended by everything marched down the street demanding for me to be arrested.

By noon it all melted

Moral: There is no moral to this story. It is what we have become, all because of snowflakes. 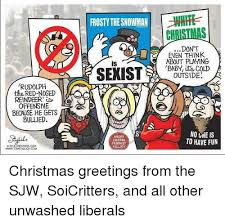