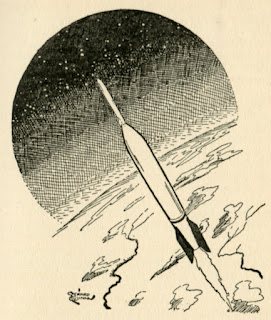 In today’s post, I’m taking a very sensible peek at the possibility of interstellar travel and some of its implications.


Some of my canny readers may have noticed that this post disappeared for a few days. This was for the purpose of revision as Sackerson had pointed out an error of fact in the article (refer to comments). Woe is me. The reference with respect to the time a spacecraft travelling at 90% the speed of light was incorrect. I have addressed the problem. I would like to thank Mr Sackerson for his keen observation and erudition. I do endeavour to keep inaccuracies in the blog to a minimum but occasionally even the golden-haired one is prone to error. Also, I'm a bit mad.

The speed of light in a vacuum is the fastest possible speed that information can travel and at  186,000 miles per second this is blisteringly fast. Light expressed as a wave is massless but particles with mass are unable to reach light speed as predicted by Einstein’s theory of relativity. For a particle with mass to attain light speed would require an infinite amount of energy- not really a practical proposition.

In a previous post, one of the reasons I gave for the lack of alien visitation is the great interstellar distances between the Earth and potentially advanced civilisations and the implausibility of travelling between these vast distances. Advanced civilisations capable of space travel are likely to be in excess of 100s or 1,000s of light years distant from Earth. Even if they could travel at great speeds, let’s say 90% of the speed of light, it would take a very long time for the aliens to reach us. Perhaps we should be thankful for that? There is no reason to consider that technically advanced alien species are benign.

Our nearest stellar neighbour, Alpha Centauri, is a modest 4.37 light years distant. If we ever aspire to travel interstellar distances then the cosmic speed limit imposes a severe problem. According to the Drake equation, there should be at least 50,000,000 technically advanced civilisations in our Milky Way galaxy alone. Some folk are of the opinion that aliens are already here. Why is it that aliens only anally probe mad people? I’m not convinced that UFO sightings are evidence that aliens have found us. Before we consider the least likely explanation we must rule out the most likely. We must apply Occam’s Razor like a sharp winnowing stick. Moving on at sub-light speed………

To explore the universe it would be great if we could find a loophole in Einsteinian physics to exploit. There are objects in our universe moving away from each other faster than the speed of light. The further galaxies are away from each other the faster they apparently recede. This phenomenon was first detected by the distinguished amateur astronomer, Edwin Hubble, in the 1920s and his observations showed that we are living in an expanding universe. If the distance between two galaxies exceeds 13698567863 light years they will recede from each other faster than the speed of light. This appears to contradict all that we hold true of the universe but it is entirely consistent with known physical laws. The expansion is due to the creation of new space between the galaxies. The further apart the galaxies the more space is being generated between them. Why new space is being generated in our universe is another story for another time. In fact, the galaxies are moving relatively slowly through space. As an analogy envisage numerous dots placed equidistant from each other on a partially inflated balloon. As the balloon inflates the dots move away from each other ‘faster’ depending on their relative distance from each other.

Perhaps we could generate sufficient energy to warp space so it contracts in front and expands behind the spacecraft to form a ‘warp bubble’. In this way, it may be possible to ‘travel’ faster than light speed without violating the laws of causality. This concept was proposed by the mathematician, Dr Alcubierre, in 1994. Unfortunately, it was calculated that the energy required for such a propulsion system would require 10 times the energy available in the visible universe. The concept has been refined somewhat and it is now estimated that the energy requirement would be modest- just the energy contained in two Jupiters. An advantage of this form of travel is that space/time dilation would not occur. According to Alcubierre’s principle, space and time would move and distort around a stationary craft.

Another possibility is to accept that faster than light travel is not possible but aim for extremely fast sub-light speeds, for instance, 90% the speed of light. There is nothing here that violates the laws of physics however, it would be extremely difficult, from a technical point of view, to pull off. Realistically we would have to exploit the property of anti-matter to annihilate normal matter to produce prodigious amounts of energy according to the formula: E=MC2 . First, we would have to find a way to manufacture large amounts of anti-matter. Storage of anti-matter is clearly a problem. Initially, it would have to be rendered inert by placing the exotic matter in a huge magnetic field to prevent premature detonation. Once the controlled annihilation is activated the reaction would produce extreme amounts of directionless gamma-ray radiation which would promptly vapourise the space craft’s inhabitants. Before this could happen, the radiation would have to be converted back to a particle. Then the particles could be directed by a magnetic field to provide thrust.


In theory, we could attain very fast sub-light speed travel, perhaps 90% of the speed of light (or more). At these high speeds the macroscopic consequences of relativity would kick in and significant time dilation would occur. Thus, people on a spacecraft travelling at 90% the speed of light would experience time differently according to their internal frame of reference in comparison to an observer on earth. For the astronauts on the craft travelling at 90% light speed, the journey would take 2.12 light years! How can this be as it suggests that the craft is travelling faster than light speed? However, there is no rupture of the constant physical laws that determine the universe as the astronaut would experience the trip as shorter in total distance. Isn’t relativity completely bizarre and counter-intuitive? Time dilation is only going to get worse as we travel faster and approach the speed of light. From a practical standpoint, this means that interstellar travel at sub-light speeds is a one way trip for the astronauts. How would they feel to come back home to find their grandchildren dead of old age?

Space exploration will no doubt continue. The extent of that exploration is heavily dependant on the attending technology. To be honest we are not even close to designing a manned craft for serious interstellar travel. The challenges involved in ‘space travel’ are not to be underestimated and drives sufficiently powerful may take decades or even centuries to develop.


I'd like to finish with a thought experiment. Imagine that it is possible to travel at the speed of light. At light speed, the universe would become but a point and the time taken to travel this point would be instantaneous. Makes you think, dun it?