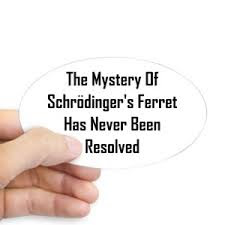 The famous thought experiment, Schrodinger’s ferret, devised in the 1930s by the physicist, Erwin Schrodinger, has insinuated into general consciousness without being understood by the general population. The development of quantum physics came hot on the heels of Einstein’s insights concerning relativity. If the concept of relativity is strange and counter-intuitive, the quantum world, in all its glory, is so weird and bizarre that sane physicists have been driven to contemplate the possibility of supernatural forces at work in the universe. More fool them, say I.
At the beginning of the 20th century, all seemed tame and sensible with the real world of physics. Newton had entertained his vast intellect with the physical world in the mid-17th century and set things to right. He tackled the main problems of physics and prevailed in the realms of optics, gravity and motion. If ever there was a god in the world bedecked in human raiment, then Newton was that embodiment. Such intellectual immortality fosters an air of stifling, intellectual atrophy and although the great Newton described the effects of ‘gravity’ he had no idea of what this mysterious force consisted of and this problem remained a thorn in Newton’s intellectual side until his death. Newton’s work on ‘nature’s wonders’ acted as a block to future discoveries in the realm of relative motion. Newton’s three laws described the motion of physical bodies with such elegant mathematical precision that further exact delineations seemed futile.  But the pesky problem of gravity still remained. Then in 1905 and 1915, Einstein came along with his rather strange theories of relativity (special and general) upending Newtonian physics in a thrice. His theories suggested an explanation of gravity, of sorts, indicating that this force existed as a mere artefact of mass deforming space-time.
Anyway, I’ve digressed somewhat. At the beginning of the 20th century, the world of the ‘super small’ was showing signs of being rather odd and quaintly silly. In 1900 Max Planck devised his quantum hypothesis of energy consisting of discrete elements (quanta) although the name ‘quantum mechanics’ would not be coined until the 1920s. At the infinitesimally small, particles and energy seemed to exist in discrete states spread out in a blurry mess. Their position in space could only be described statistically (damn statistics) and the ultimate position could only be determined by interfering with the situation by direct observation and measurement. At such a time all probability collapsed and the particle conveniently reverted to a single position in space. The situation appeared so counterintuitive that it spurred the great physicist, Erwin Schrodinger, in the 1930s, to propose his famous thought experiment to illustrate the absurdity of the current status of quantum mechanics, known as the Copenhagen explanation. The experiment is outlined below for edification and general illumination in order that the blind may see. 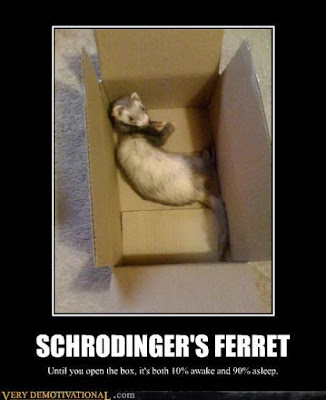 Imagine a box containing a ferret, it might be Shagger, it might not- can’t say. Also, in the box is a small amount of radioactive material wired up to a vial of hydrogen cyanide gas. Please note, the wire is super strong to prevent Shagger from chewing through it thus voiding the experiment. The lid of the box is closed and the box remains undisturbed for one hour. During that time the radioactive material has a 50:50 chance of decaying. If that occurs the mechanism is triggered releasing the gas, killing poor Shagger.  According to accepted quantum theory, during the experiment, the ferret exists in a zombie state of neither being alive or dead (quantum superposition). The situation can only be resolved by peeking in the box at the end of the experiment. Thereupon the ferret’s situation would collapse into a state of life or demise.


Tis of course, totally absurd. We know that the macroscopic world does not act this way. We can’t have a continuous sensible extrapolation from the quantum world of the very small to the ‘real world’ of the large. If matter ultimately exists as a blurry mess the appearance of solidity is utterly convincing, at least to our eyes.
The experiment is often put forth as Schrodinger’s way of illustrating the strangeness of quantum theory while in fact, he wanted to illustrate the ridiculousness of the quantum world as it was postulated in his day. He in no way accepted this interpretation and considered the original premises, flawed.
Subsequent modern experiments have lent support to the mysterious blurry nature of matter at the quantum level. How is it possible for a particle to exist in many incompatible states and how does this relate to how matter behaves according to our priveleged perspective? We are starting to stray into the world of metaphysics and rarefied philosophy and I will proceed no further. Anyway, while you contemplate such outré notions, hopefully remaining sane, I’m off with Shagger, assuming, of course, a happy resolution to the experiment, to go a rabbiting.


Please note: no ferrets were harmed during the writing of this post