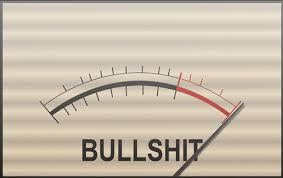 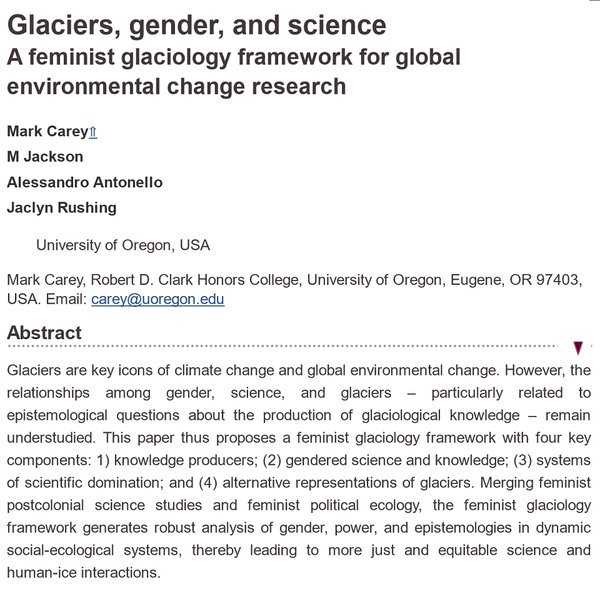 What you see is an abstract for a 'scientific paper' in a supposed peer reviewed and respectable journal. This is too good not to post today and consequently, I've postponed the post I had prepared. I admit that I've shamelessly stolen the above image from a site I frequent. However, as always, the commentary is mine. On first reading, I concluded that this must be a spoof article produced for our amusement and whimsy. But this is not the case. If you would like to check out the article in full you can see it here.  If like me you can't be arsed or simply have better things to spend your time on, here is an ice-cold taster which provides the full flavour of the article. Strangely enough, the article is available for nowt.

Feminist and postcolonial theories enrich and complement each other by showing how gender and colonialism are co-constituted, as well as how both women and indigenous peoples have been marginalized historically (Schnabel, 2014). Feminist glaciology builds from feminist postcolonial science studies, analyzing not only gender dynamics and situated knowledges, but also alternative knowledges and folk glaciologies that are generally marginalized through colonialism, imperialism, inequality, unequal power relations, patriarchy, and the domination of Western science (Harding, 2009).

Two points to make: Knowledges is not a real word and the above passage is pure leftist gobbledy speak and thus says very little.

From what I can gather, this seminal work examines the relationship between feminism and glaciers. This relationship has been woefully neglected, apparently. I quote: ''Merging feminist postcolonial science studies and feminist political ecology......'' And there was me a thinking that science was all about finding the everlasting light bulb and stuff and 'feminism' was confined to the so call 'social sciences'. As I've said elsewhere, putting the word 'science' after another word doesn't necessarily and automatically make the composite phrase relate to legitimate science, as I know it at least. Sociology is not science. And the notion of feminism is absolutely and definitely not, science. The study of glaciers can be scientific although approaching the topic from a feminist viewpoint adds nothing to the scientific credibility of the subject.

We can have a laugh at the author's expense. Presumably, they are serious and actually believe what they 'research' and write. I bet they are fond of tofu and wear biodegradable plastic shoes as well. The tragedy, of course, is that this particular and vital study was funded by the American tax payer to the tune of  $400,000. That's a helluva lot of light bulbs. Though to be fair, the money was not spent entirely on this on one paper and I've been reliably informed that the lead author is a serious researcher who has produced solid academic work in the past.

Anyway, I'm going to take my medication now and afterward curl into a ball, in a darkened room, and gently rock.......
Posted by Flaxen Saxon at 21:20