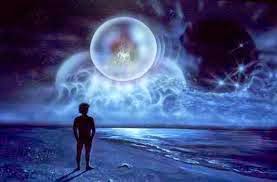 How can you not be inspired by the cosmic awe? When you contemplate the vastness, of time, space and the universe how can you not become giddy? As a child I was fascinated by boundary and infinity. When I looked to the night sky I saw a myriad of twinkling stars and wondered what lay beyond.
The human mind does not deal well with infinity. We live in a world of solid edges and our minds are hard wired to expect limits. Of course this does not mean we can't understand the concept of infinity. Think of a very large number and add one.
Cosmologists have been wrestling with the fundamentals of the universe for sometime. Has it always existed? Did it have a beginning? Is the universe enclosed or does it stretch on forever? The consensus suggests that the universe had a beginning about 14 billion years ago with the 'big bang'. In a moment all matter and energy, and time as we know it, exploded from a singularity. Ever since this matter has been expanding. On the way galaxies and stars coalesced and so we came into being. That being the case, the universe must have an edge. We can't see that edge although we can get close; cosmologists can observe the near beginning. When they reach out they can see the universe as it was some 13.6 billion years ago. A mass of swirling matter and energy. Because light travels at a finite speed (186,000 miles per second) it has taken light almost 14 billion years to travel from this region of space. We see the universe not as it is now but as it was in the unbelievable past.
It seems that galaxies are racing away from each other and heading toward the edge. Or perhaps the universe is just getting bigger. Ever since Einstein we understand the flexible nature of space and time. Some cosmologists think that if we ever leave the universe from one side we will simply enter the opposite side without even knowing. And we may not be alone. Some distant galaxies are not only dispersing, they seem to be drawn in a particular direction. Dark forces (dark flow) seem to be acting and pulling them toward, what? Perhaps to other universes which lie just beyond the edge of ours.
Cosmologists are now considering the possibility that many universes coexist. Imagine a cluster of bubbles. Each universe may have its own unique properties and laws and may look very different from ours. It is known that the conditions in our universe are very precise and that if properties were set slightly differently the universe would be a strange and alien place indeed. So strange, that stars, planets and hence life, and ultimately us, would be an impossibility. But imagine an infinite number of universes, or even just an extremely large number of them, each with its own set of physical principles- all different. That being so, the probability of a single universe being 'just right' doesn't seem so implausible. Playing the probability game can make your head hurt. But imagine a single grain of sand. Imagine all the sand grains which exist on the earth. The number of individual sand grains is unimaginably large. But if you could fly anywhere in the world, perhaps to a tropical beach or even to a remote desert and select a single grain of sand, the probability of you selecting that particular grain would be infinitesimally small. But regardless, there it is lying in the palm of your hand.
If contemplating the universe doesn't give you a thrill, an atavistic chill, then you must be dead. On a lighter note, contemplate this video. It made I laugh, so it did.
And who said men can't multitask?
Posted by Flaxen Saxon at 13:11