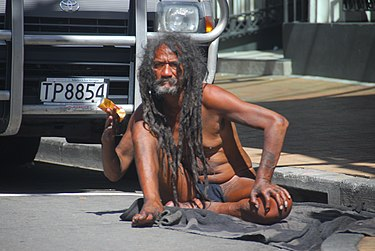 Blanket Man Waiting for a Waka

This post has been inspired by one of my regular commenters, who will remain nameless (Doonhammer).

This post, in a way, is a follow on story to my previous post concerning the Iranian hermit. 'Blanket Man' (for it is he) was an exciting fixture in Central Wellington for a decade. He stood out from the other homeless folk congregating in the area due to his erratic behaviour and lifestyle. For instance, he wore nothing but a blanket- hence the monicker. Indeed, his fame spread wide and far and hence he has become immortalised in Wikipedia- go check it out.

Of course, throughout his itinerant existence, he attracted the attention of law enforcement. What can you do to a man who lives outside the law? Predictably, he ended up in 'da nick' for a while and was exposed to the indignity of being assessed by mental health professionals resulting in a residential stint in the Wellington 'Nut House' (Ward 27). Also predictably, once released unto 'civilised' society he took up his usual position and stance/posture in Courtney Place, Central Wellington.

His convictions were relatively mundane, but legion. Apparently, his police record stretched to 17 pages. Most of his arrests related to drink and drug offences (marijuana). He was more of a nuisance than a criminal menace, although local businesses were none too keen on his shenanigans as he had the woeful habit of cluttering doorways with his filthy presence and depositing sundry rubbish items with random abandon. On one occasion he was convicted of driving a vehicle without a licence. In court, he said he was 'driving' a waka (Maori canoe). His inventive defence cut no sway with the residing magistrate and he was sentenced to 15 years of hard labour in the Wellington gulag (I made that up). Although he was sentenced to community service, on at least one occasion, the fact that he refused to wear shoes or clothes precluded the enactment and fulfilment of his sentence. Obviously, there was little point in administering a fine.

In 1979 he was charged with drunk driving causing the death of his close friend. It has been suggested that this episode resulted in a 'breakdown' ultimately contributing to his societal withdrawal and vagrancy. Anyway, for whatever reason, he appeared in Wellington City Centre about 2000 and quickly became somewhat of a local celeb, and dare I say it, icon.

Blanket Man died in Wellington Hospital, on 15th January 2012, probably of alcohol-related causes. He now resides with his god(s), Tane-mahuta/Ranginui. Apparently, the Maori gods don't adhere to any formal dress code, thus, he will not be castigated/castrated for his brand of sartorial inelegance.

His name was Ben Hana.