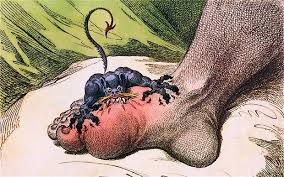 Today I’m going to consider, ‘The malady of kings’ or as it is more commonly known, gout. It needs to be said: I don’t have a personal stake in this condition. I have never suffered, but I know people who are so afflicted. However, I do suffer from an arthritic condition of both big toes with the quaint name: ‘Hallux Rigidus’. Tis a condition I have had since my early 20s. Effectively, my toes have become fused at the first joint causing pain on walking. Currently, I’m taking opiate pain killers to deaden the pain. In the future, I will need surgery to remove chunks of bone. Enough about me......

As far as we are aware, gout was first described by the Egyptians in 2640 BC. Gout was well known to the ancient Greeks. Hippocrates, the father of medicine, described the condition in the 5th BC as the ‘unwalkable disease’ and thought it was due to an imbalance of the humours. I suspect a sense of humour is absent once the sufferer is gripped in the grasp/rasp of an acute episode.

It was noted by Hippocrates, that gout was associated with the rich, or more importantly with rich living. A diet heavy in meat, delicate dainties, and wine were prophetic portends of the disease. The condition is caused by the deposition of uric acid crystals in the joint. The foot is so favoured due to the circulation in the extremities being less ‘efficient’ than elsewhere. The formation of crystals in the big toes results in severe pain during an acute attack. An acute episode may last up to several weeks and the pain has been described as ‘exquisite’. The pain is, apparently, extreme and likely to turn a sane man into a god. Indeed, the pain is so severe that any pressure on the toe, even by bedsheets, result in absolute agony. Thus the sufferer eschews footwear like a gypo eschews paying tax. Repeated attacks destroy the joint tissue causing frank arthritis. In addition, crystals may form in the kidney tubules. If untreated this can progress to kidney failure.

Uric acid is a breakdown metabolite of purines which play a key role in the formation of DNA. The precipitation of uric acid in the blood occurs when the concentration of the compound exceeds its solubility. As mentioned, it will deposit in parts of the body where the circulation is ‘sluggish’ and may affect other parts such as the hands and kidneys. High levels can be caused by the overproduction of uric acid, often exacerbated by a high dietary intake of uric acid and/or problems with excretion and removal from the body. It will come as no surprise that foods rich in uric acid include red meat, shellfish, and alcoholic beverages. As is often the case with metabolic disorders there may be an underlying genetic predisposition.

In unenlightened times gout was treated with a bizarre quota of remedies. The Romans favoured the application of dung from a female goat. Strangely, this remedy did not work and subjected the gout sufferer to a period of enforced loneliness, at least until the episode abated naturally. In the 16th century a German doctor advocated eating chopped up kitten. Again, this ‘treatment’ was ineffective for gout but it did prevent the patient from coughing up fur balls. In 6th century Byzantium, a physician named, Alexander Tralles (for it is he) treated gout by feeding the afflicted an extract from the autumn crocus. Apparently, the Greeks had been using this plant as a purgative for over a thousand years. But Tralles was the first physician to specifically treat gout with crocus. This treatment proved effective due to the active alkaloid present, colchicine. Indeed, until fairly recent times colchicine was the treatment of choice for gout. Recently, colchicine has been replaced with non-steroidal anti-inflammatories. These drugs are more effective and circumvent the acute toxicity inherent in colchicine treatment.

Gout predominantly affects men as women receive a degree of protection due to eostrogen. However, when women achieve menopause this immunity is lost. As previously noted, historically the condition was associated with the upper orders as the plebs were unlikely to be able to sustain an expensive diet rich in red meat. These days gout has become less fashionable with the wealthy and even the poorest prole can be so afflicted as long as he sticks to a diet of big cacs, copious amounts of ale, and buckets of whelks. The disease once the preserve of the gentry has become egalitarian and has slipped down the social scale to render the lower orders with an excuse to sign on the dole. How quaint.


Pain, scorned by yonder gout-ridden wretch, endured by yonder dyspeptic in the midst of his dainties, borne bravely by the girl in travail. Slight thou art, if I can bear thee, short thou art if I cannot bear thee!