In these strange and wondrous times, I thought a change from dreaded crony virus topics, which seem to assail every available orifice these days, would at least add a little intellectual variety. 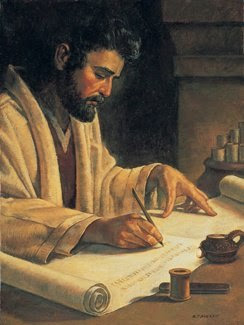 The fact that Jesus had several brothers, and at least one sister, is a fact attested to several times in the New Testament. It is also recorded that his family appeared to have little to do with him during his ministry. Perhaps his mother was present at the crucifixion but there is no mention of his siblings. Indeed during his ministry, Jesus made it plain that he wanted little to do with his immediate family.

The mention of Jesus’ siblings in the bible did not sit well with the early church fathers as it contradicted a certain creed that Jesus was born of a virgin and that Mary never relinquished ‘this treasure’, at least not to a mortal man. The presence of Jesus's siblings was a major embarrassment and Christian scholars, ancient and modern, have come up with a host of contortions in order to explain away inconvenient bible passages. Thus, perhaps the gospellers were referring to Jesus’s cousins or maybe Joseph’s children from another mother. The half-sibling scenario raises further problems: if Jesus had half brothers and sisters they must share a father, that is Joseph. But isn’t Joseph just a surrogate father as Jesus’ real father is none other than God himself? Of course, Christian apologists, old and new, were well aware of this conundrum and on the whole favoured the cousin ‘hypothesis'. As for the cousin hypothesis, I would say this: the New Testament was written in Greek and the Greek language distinguishes between ‘cousins and brothers’ very well. If the New Testament writers meant to write about Jesus’ cousins they would have had the lexicon to say so. O what a tangled web we weave.

From the book of Acts and from other sources, James, the brother of Jesus, becomes the leader of the early Christian movement after Jesus’s death, at least in Jerusalem. James was a highly observant Jew according to Jewish law (Torah) and was known as ‘James the Just’ among, not just his Christian followers, but also considered so by orthodox Jews. As far as we can piece together, James became a Christian after the ‘appearance of the risen Lord’. I’ll say no more about the resurrection stories as we stray from the territory of history and enter the murky world/word of faith.

At this stage it is important to mention, Saul of Tarsus (later, Paul): a most interesting character and worthy of a separate post. Paul, a Pharisee converted to Christianity soon after Jesus’s death. Paul is a strange, passionate and driven man. He comes over, as mentioned in the biblical literature, as a man on a mission to convert the Roman world and Empire to Christianity. He travelled widely, sometimes alone, sometimes with others, across the Mediterranean. His followers also preached throughout the Roman world as documented in the books of Luke, Acts and in the epistles. Paul comes across as a quarrelsome and prickly preacher. He differed from James’s mission in that he was concerned to convert not only Jews but gentiles as well. In contrast, just like his brother, James was mainly concerned with the conversion of Jerusalem Jews where the leadership of the early church was based.

The mission of James is made clear in the epistle which bears his name (80-90 AD. The epistle is thought by many scholars to be based on a sermon of James. It is highly unlikely that James wrote this letter. James, like his brother, Jesus, was an illiterate peasant. What comes across in the letter is James’s piety; his concern for the poor and the condemnation of the rich. Therefore, we see James advocating and disseminating Jesus’s core message. It was a message unlikely to endear him to the wealthy Jewish priestly elite and to the high priest of the time, Ananus.

While James remained within Jewish law and expected his Jewish converts to continue to observe the law, in its entirety, Paul appears not to be concerned with the trappings of Judaism. Thus his gentile converts did not have to undergo the painful indignation of circumcision or adhere to the strange dietary rules. In this way, Paul’s form of Christianity thrived among the gentiles of the Eastern Roman Empire. However, he could make little headway among the Greek-speaking Jews of the diaspora. This is an interesting point: diaspora Jews appeared to be more literate and sophisticated than their Jewish brethren at home in Jerusalem. To cosmopolitan Jews, Paul’s teaching advocating  Jesus as the chosen messiah did not jibe well and did not conform to the Jewish concept of the messiah as related in the bible. More importantly, the notion that Jesus was a manifestation of God would have been deeply shocking, and a complete anathaema to a devout Jew. It would come as no surprise, therefore, that James and Paul clashed heads when it came to teachings and conversions. James’s Christianity was Judaism with a gentle twist and he had no ambition to found a new religious movement. For Paul, Judaism was a base and prelude to the foundation of the new breakaway religion of Christianity.

The bible recounts several terse encounters between Paul and James in Jerusalem. Under pressure and coercion from the primary church leaders, Paul was made to recant and undergo purification in the Temple (57AD). But as we know, Paul soon reverted to his wicked and heretical ways once he left Jerusalem and the orthodox Christian leadership.

It seems that it was Pauls’s brand/blend of Christianity that won out in the end mainly due to a twist of fickle fate. In 62 AD James was executed by order of the High Priest and the leadership of the nascent Christian church passed to Jesus’s cousin, Simeon. Shortly after, Judea descended into chaos and war with Rome. The result: inevitable Roman devastation of the land, the sacking of Jerusalem and the total destruction of the Temple. Under these circumstances Jesus’ followers and Jesus’ conception of Christianity disappeared. Pauls’ brand of Christianity survived and spread due to its simple message of salvation and its focus on the numerous poor. Although persecuted throughout the next couple of hundred of years, Christianity's growing popularity in the Roman Empire led to it eventually being adopted as the state religion in 380AD. The rest is history....