The Battle of Neuve Chapelle March 1915 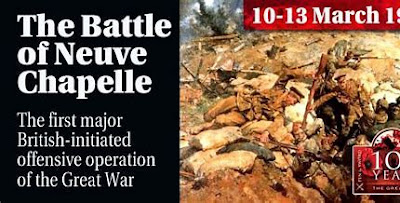 After the storm of 1914, the Germans opted for a defensive pause on the Western Front. Their main thrust for 1915 would be toward the East to support their ailing ally, Austro-Hungary; this was to be a grave error. In early 1915, the Germans overrated the military might of the Russians and severely underrated the British. The Germans had not yet appreciated that the British army was a blank cheque, the necessary noughts would be filled in, given time. The military presence of the British on the Western Front in early spring of 1915 was not formidable, but with the mobilisation of the Empire, the weight of its economic and military might would become fully manifest in 1916. In hindsight, the German strategy for 1915 should have concentrated on the British front in the west. Repeated violent assaults on an emerging army may have forced the decision in Germany’s favour. But history is not a matter of ‘might be’. Hindsight makes victors of us all.
The British High Command decided on offensive action in the spring of 1915 in the Artois district of Northern France. Initially, the battle was planned as a joint affair with the French attacking from the south in the Champagne. The aim was to snap off the German salient forcing a German retreat. Furthermore, Allied advances in the region would result in the capture of the strategically important Douai lateral rail line. Moreover, there was a political dimension influencing the British decision to move to the offensive. As a matter of national pride, it became incumbent upon the British to formulate and execute an offensive plan. The French, and indeed the Germans, had no high regard for the attacking capacity of the British army of the time. At best the French envisaged the British holding the line and taking over further trenches to free the French army for the offensive. As the war unfolded, ally and foe alike would come to appreciate and respect the British Army as a fighting machine.
The joint offensive did not occur. As a prelude to the attack, the French insisted that the British take over a portion of the French trench line. Events elsewhere conspired against this. The last regular British Division available, the 29th, earmarked for trench extension was diverted to fight for the folly that was the Gallipoli campaign. Perhaps in a fit of Gallic pique, the French related to the British that without the trench extension, they would no longer have the necessary resources to aid the British attack to the south. Thus, for the want of a single Division grand joint allied strategy would flounder. This event cruelly underlined the pitiful weakness of the British military at this early stage of the war. So, for prestige and in part to stimulate/simulate morale, the British would attack, alone.
The attack would introduce a few innovations and frank novelties. The Royal Flying Corps would provide information concerning the German lines, information subsequently incorporated into the British maps and attack plans. Light railways were constructed for supply, infantry rehearsals and deceptions using dummies became part of the grand scheme. Even with elaborate precautions, it was considered unlikely that anything of significance would be achieved without French support.
On the 10th May, the British First Army, under Sir Douglas Haig was committed to the battle of Neuve Chapelle. Thus, the peal of ordinance rang out on the morn of the 10th with a barrage of 35 minutes. A desultory bombardment compared to later battles, not so much governed by tactics but by available resources. The short bombardment, in the end, turned out to be a blessing as it caught the Germans completely by surprise. The lengthy bombardments which would characterise 1916 and 1917 always alerted the defender allowing them to rush reinforcements to the line in anticipation of the infantry attack. On this occasion the British infantry broke the German line, the only time it would do so throughout this grim war. Unfortunately, the British were bewildered by their own success and failed to exploit the breach. Part of the problem lay with communication and the confusion inherent in all battles (‘fog of war’). As the British hesitated the Germans reacted, rushing reinforcements to the ruptured line. The British had lost the initiative and once the hole had closed they could advance no more. In keeping with the military doctrine of the time, the Germans counterattacked also to no avail.
The battle lasted a mere three days but sent a message to all who could read. Initial success, perhaps achieved with great loss could never be maintained. Attacking armies moving at the pace of the marching man would quickly face fresh enemy reserves rushed to the scene by rail. The Allied hope of rolling up the enemy line was always just another battle away. Twas a dangerous illusion/delusion which would dictate Allied strategy for most of the war.
The British lost around 13,000 men a figure mirrored by Germans. Not a great deal in comparison to Somme battle where the British suffered 58,000 casualties in one day. At the time the casualty list at Neuve Chapelle caused a degree of alarm and consternation with the British public. The Germans and French were both impressed by the British effort. No longer could the Germans disregard the attacking fortitude and ability of the British army. The single line opposite the British line would start to thicken making future offensives by the British incredibly costly as witnessed by the Somme and Passchendaele offensives of 1916 and 1917. And so, the war throughout 1915 rattled on in the west and continued with British and French offensives. Little was to be achieved against a stubborn German enemy in defence. Indeed, the battles of 1915 seemed but a bloody prelude to the debacle of the great battles to come.