The Battle of Mons 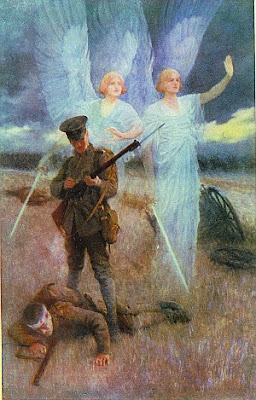 Britain entered the First World War with a small but highly professional army. The Germans, French, Austria-Hungarians and Russians raised millions of men ready to take the field while Britain mustered an army of only 80,000. The Germans thought it a fine joke and laughed that if the British Expeditionary Force (BEF) landed on German soil they would send the police to arrest them. The Kaiser famously referred to the BEF as: “That contemptible little army”. The French Premier expressed the sentiment with subtle Gallic humour. When the French Premier, Poincare was asked how many British troops he needed, he replied: “Just one, and I’ll make sure he gets killed”. Poincare appreciated that British power would take a while to get started, but once fully mobilised would represent a formidable asset.

During August the German juggernaut seemed unstoppable as its vast army corps smashed and wheeled through Belgium. On the 22nd of August, the BEF reached the Belgium mining town of Mons and dug in. On the 23rd two German army corps blundered into the entrenched British. The British rifle fire of 15 rounds per minute devastated the Germans as they attacked in massed frontal waves. So accurate and deadly was the British musketry that the Germans thought they were being decimated by machine gun fire. In fact, the British had only two machine guns per battalion.

Enter the Angels, from upon high. It seems that divine providence was sent to aid the British during their gravest peril. It was duly reported that a troop of Angels appeared within the British lines. A story eagerly pounced upon by the British press and regurgitated for a gullible public. In truth, god was hard pressed to choose between the armies as the Germans proudly sported, 'Gott  uns' on their belt buckles. Mayhap god was partisan after all and supported the underdog in spite of the blazoned exhortations from the Teuton. Yea, truly, gods are fickle creatures, full of whims and caprice. How many Germans were killed by ‘Angel fire’ is difficult to discern as there are no official contemporary records of this sort of thing.

The British general, Sir John French decided to try his luck for  day and stand firm against the inevitable enemy attack on the morrow. However, to his right, the French were withdrawing and to prevent the annihilation of his gallant little army he had no choice but to fall back in concert with the retreating French troops. After three days of retreat, the British turned and bloodied the Germans once again at Le Cateau. However, the story of this battle will have to wait another day.

To be fair the engagement at Mons was a relatively small affair especially in comparison to later Great War battles, but it did represent the first battle of the war in which the British participated. The British, on the defensive, suffered a loss of 1,600 men, while the offending Germans suffered relatively heavy losses of 7,000. This emphasised the main problem of modern warfare- defence had become immensely strong and attack, therefore, had become proportionately costly. And this was a dilemma faced by all combatants throughout the war, a dilemma never completely resolved, at least in this conflict. As for casualties, the relative loss favoured the Germans. The loss of 7,000 meant nought in terms of the millions of men deployed. For the British, this rate of loss could not be borne for long. By the end of the year, the British professional army was almost spent leaving a cadre to train the mass armies to come. Their place in the line was filled with territorials from Britain and men from Britain's wide spread colonies and Dominions. These men would have to hold the Western front until the million man army came into line during 1916. This new army of enthusiastic volunteers would be bloodied in the summer of 1916 at a place called the Somme. On the first day of the Somme, the attacking British would sustain 60,000 casualties. Perhaps the Angels were busy that day….

And lets not forget the report of English longbow men entering the fray. I wonder how many Germans were riddled with arrows?