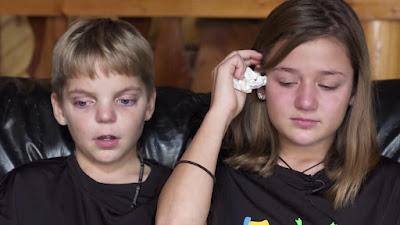 Is there a more terrible disease than  disease?  is a neurodegenerative disorder with an incidence of 1 in 20,000 and is inherited as an autosomal dominant. An autosomal dominant condition ensures that if you carry a single mutant gene you inevitably develop the condition- a mutant gene which is passed onto 50% of your offspring.  disease strikes in the prime years of life (30-40) and slowly destroys your motor and cognitive powers resulting in death, typically 15 to 20 years after developing initial symptoms. Consequently, due to the disease's late onset,  you are likely to pass it on to your children before you develop symptoms yourself.

The culprit is a mutation affecting a gene which manufactures the huntingtin protein. Although the exact biological function of this protein is not fully known, it is likely that it plays a critical role in nerve function and development. The mutant protein undergoes an altered configuration causing chains of protein aggregates. The aberrant 'strings' of protein accumulate within the brain where they progressively destroy nerve tissue. Whole families are ravaged and destroyed by the disease. If you carry the mutant gene you linger under a death sentence without reprieve. It is no wonder that the suicide rate amongst  families is high.

Imagine being in your 20s watching your mother, or father, falter and decline both physically and mentally and knowing there is no hope of recovery; and that you have a 1 in 2 chance of being affected yourself. Genetic testing is available, however, some potential sufferers choose not to be tested. For those who choose diagnostic testing, a positive result is a hard psychological burden to bear, although reactions differ depending on temperament and circumstance. Even those testing negative are not spared as they must reconcile their good fortune with the knowledge that their siblings may not have faired so well.

The only treatment to date has been palliative; no more than keeping the patient as comfortable as is possible until demise. However, recent research at University College London has focussed on a drug which blocks the formation of the aberrant protein and initial trials on  patients have been very encouraging. The drug is injected into the spinal cord and interacts with messenger RNA from the damaged gene. This messenger RNA would then go on to direct the formation of the mutant protein. However, in the presence of the experimental drug the RNA molecule is rendered non-functional and therefore the damaged protein can no longer be manufactured. During the first human trial, it was demonstrated that the levels of the abnormal protein were substantially reduced.

Is this a cure? Probably not. A reduction in the protein would have to be correlated with an improvement in the clinical condition. This will take further trials and many years work. Current work has been undertaken on patients already showing symptoms of the disease. Long term work will be necessary to see if the disease can be stabilised and even reversed. Perhaps the most enticing and exciting prospect will be to treat asymptomatic carriers of  to see if the disease can be prevented from developing later in life.

The use of drugs to target gene expression in combating genetic disease is not a new approach and has found a particular application in cancer. It is hoped that a similar approach can be adapted to treat other neurodegenerative conditions where a build up of protein is responsible for brain cell death. Alzheimer is one such condition where the deposit of protein plaques result in neural tissue destruction.

The next wave of genetic research will herald a ‘golden age’ for disease treatment. Unlike many neurodevelopmental conditions, most autosomal disorders manifest at birth. The key, therefore, is to implement drug intervention in the womb, ideally early in embryo development. The goal will be to modify gene expression to prevent or ameliorate the condition. The rub, of course, is that sophisticated genetic therapy will not come cheap and therefore as a society, we may face the real dilemma of withholding effective treatment because of prohibitive cost. Tis indeed a brave new world.

Just a comment: Astute readers will have noticed that I have not used the possessive apostrophe for  disease. It is no longer considered correct form to refer to the disease as 's disease (Huntington's chorea is right out). In the same way, Down's syndrome is rendered Down syndrome. As for the old tag, 'Mongol', this is deemed totally unacceptable in any polite medical lexicon.