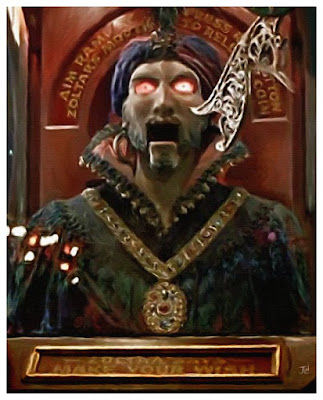 I have always known that I’ve been blessed with psychic scryng abilities. Often, whilst ensconced in the ‘Felching Ferret’ hostelry on a Saturday night, I’ll be approached by poor shuffling wretches seeking guidance and reassurance in a world gone awry. I offer solace and sage counsel to the lost, administered with characteristic aplomb and verve. “Tell me Flaxen what do the fates hold for me? Can you lift the shimmering veil and peer into the rent betwixt our world of sensibility and the outré world of the preternatural? Will you commune with the shades and eldritch spectres which inhabit the transcendental realm of shadows and transcribe their insistent syllabic whispers?” My eyes cloud and I enter a dense world of reverie and detachment. Peering deep into the froth atop my brown ale I give heed to the patterns in order to discern the future. After a deep quaff (15 pints) I enter into an intense trance. My china blue eyes roll upward revealing glistening whites flecked with blood. All becomes serene and a great gust of cleansing wind erupts from my nether regions as if a thousand furies had been released upon the agog and gagging populace. Clarity descends and through the choking miasma all becomes manifest, to me. With ponderous quavering tones, I pronounce accordingly: “I see much tribulation. From the north marches will arise a great brigand horde. They will burn and pillage all before them. The skulls of the fallen will be stacked in large mounds and the carrion crow will wax fat. A great melancholic despond will descend upon the land. You will lie prostrate before them. Your kin, even until the little ones, will be seared by fire. Your fair maids will become theirs. Your bones will bleach and blanch under a cruel, cold, pitiless winter sun…… But apart from that I see the latter part of the week being good for investments and sound financial decisions. Romance is in the air; catch it, put it in a box and stifle it before it draws a breath. And as always, don’t forget to floss.”
See, I told you I wasn’t a well man.